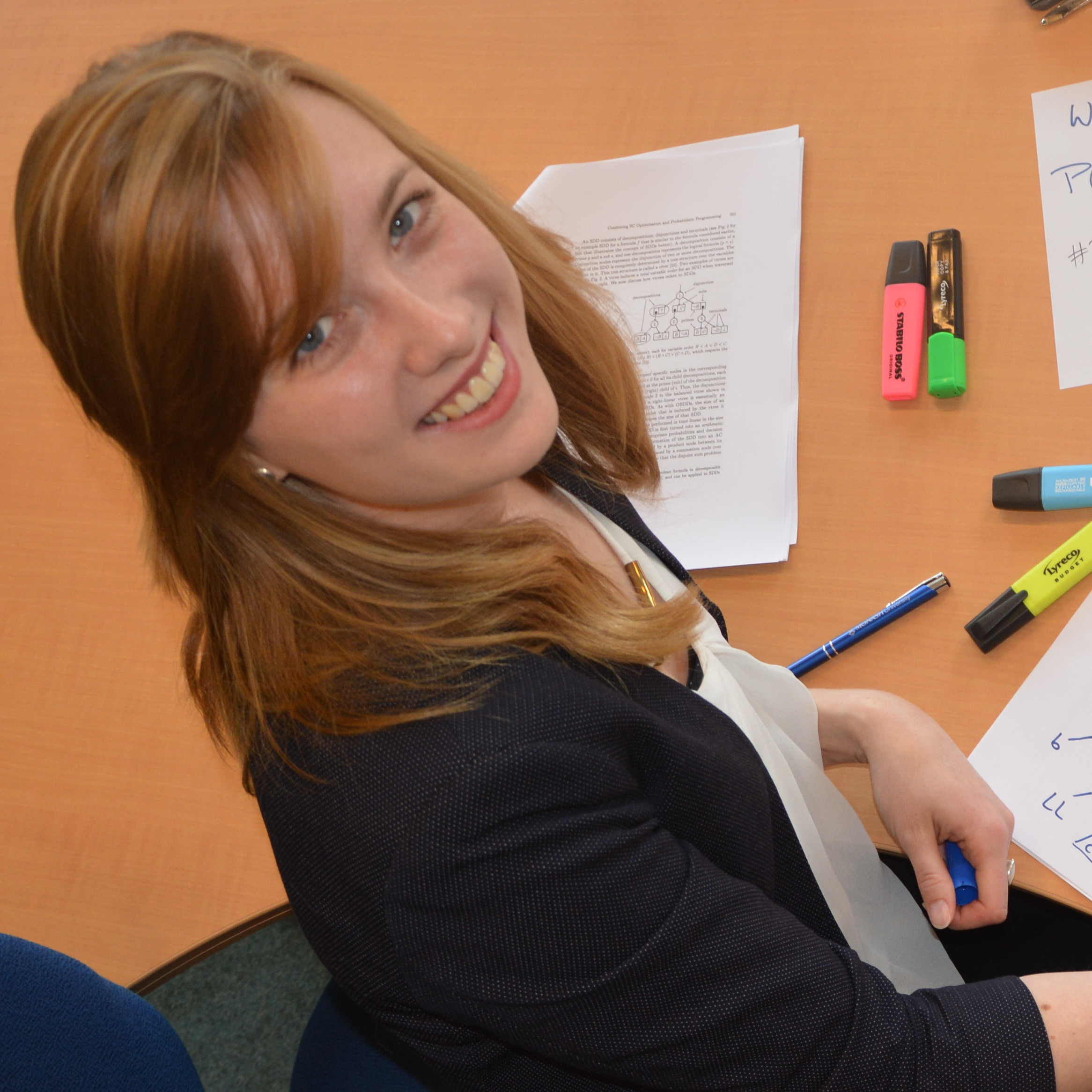 To my surprise, I won an award for public speaking!

In the second year of my Master in Artificial Intelligence, I did a 18 ECTS research project in collaboration with United Nations Global Pulse. The goal of the project was to gauge people’s attitude towards biofuels from analysing the discourse on Twitter.

My father celebrated his 65th birthday around that time, and an acquaintance of his approach me at the party, leading to a conversation that went somewhat like this:

acquaintance: “Hello! What have you been up to lately?”

me: “I have been working with the United Nations on an Artificial Intelligence project where we apply sentiment mining on tweets to gauge people feel about biofuels.”

acquaintance: “Oh, okay, in that case I’ll go talk to your sister. Do you know where I can find her?”

At the time I took it quite personally. Looking back, I can see how my one-sentence blurb wasn’t really selling my work as an interesting topic of casual conversation.

Recently, an opportunity for improving my elevator pitch skills arose: the Dutch Research Council (NWO) organised a public speaking masterclass for PhD students. During the masterclass, the best presenters would be selected to battle it out during an elevator pitch competition that was to take place during the ICT.OPEN 2019 conference in Hilversum.

I had zero desire to be in the spotlight like that, but wanted to improve my presentation skills, so I signed up.

The masterclass was good fun. Trainer Jair Santanna had us read famous speeches to teach us how to think about our inflection and emphasis. I liked that he did a couple of exercises with us to get the creative juices flowing and to loosen us up. The other participants were very nice and created a safe atmosphere for each of us to try things out.

And that’s what we did. We wrote short pitches and presented them during the masterclass. It was scary, but apparently I did well enough, because my peers voted to put me into the pool of participants who would battle it out on stage during the conference.

Now that I was chosen, I had to actually come up with a good 3-minute pitch about my own research. Personally, I do not care about the applications of my research, but the hard theory is too much to go into in a 3-minute pitch for a general AI audience. Besides: it is easier to convince people of the merit of your research with a good example of an application, than just with “I like math”.

I therefore had to pick a compelling real-world problem and sell my solution to it as hard as possible. A tricky complication was that we were supposed to bring an attribute on stage, and to frame our pitch around that attribute.

I asked my colleagues for advice. The amazing Suzan Verberne listened to me describing how one of the applications of my research is helping energy companies decide which power lines to reinforce, such that their power nets become more robust in the case of natural disasters like earthquakes or hurricanes. She then came up with the idea of referencing Bob the Builder and using a yellow construction helmet as my attribute.

My colleagues were kind enough to let me practice the pitch on them, and to give me honest and solid feedback. Since I kept exceeding the 3-minute time limit, it was a great exercise in scratching material and keeping the sentences short and sweet. If you are interested, you can find the final text of my pitch here.

On the day of the competition I was not feeling well at all. I felt like I had a terrible cold, with a high temperature, dizziness and a lot of sweating. I don’t know if it was nerves or if there really was something wrong with me, but during lunch I was very tempted to just go home.

However: adrenaline is a wonderful thing.

I got on stage and told my story until… I just froze. I had practised my pitch so many times, that these times had started to blur into one. I was on autopilot to such an extent that I simply did not remember whether I had presented a particular paragraph of my story already, or hadn’t.

There was a 3-second silence in which I realised this, and decided to continue with where I thought I was in the story. After all: the audience does not know the story anyway, and being quiet looks much worse than talking, especially when the clock is ticking.

I finished 7(!) seconds before my time ran out. I guess I talk fast when I’m under stress, but this made me feel sure that I must’ve had accidentally skipped one or two sentences. 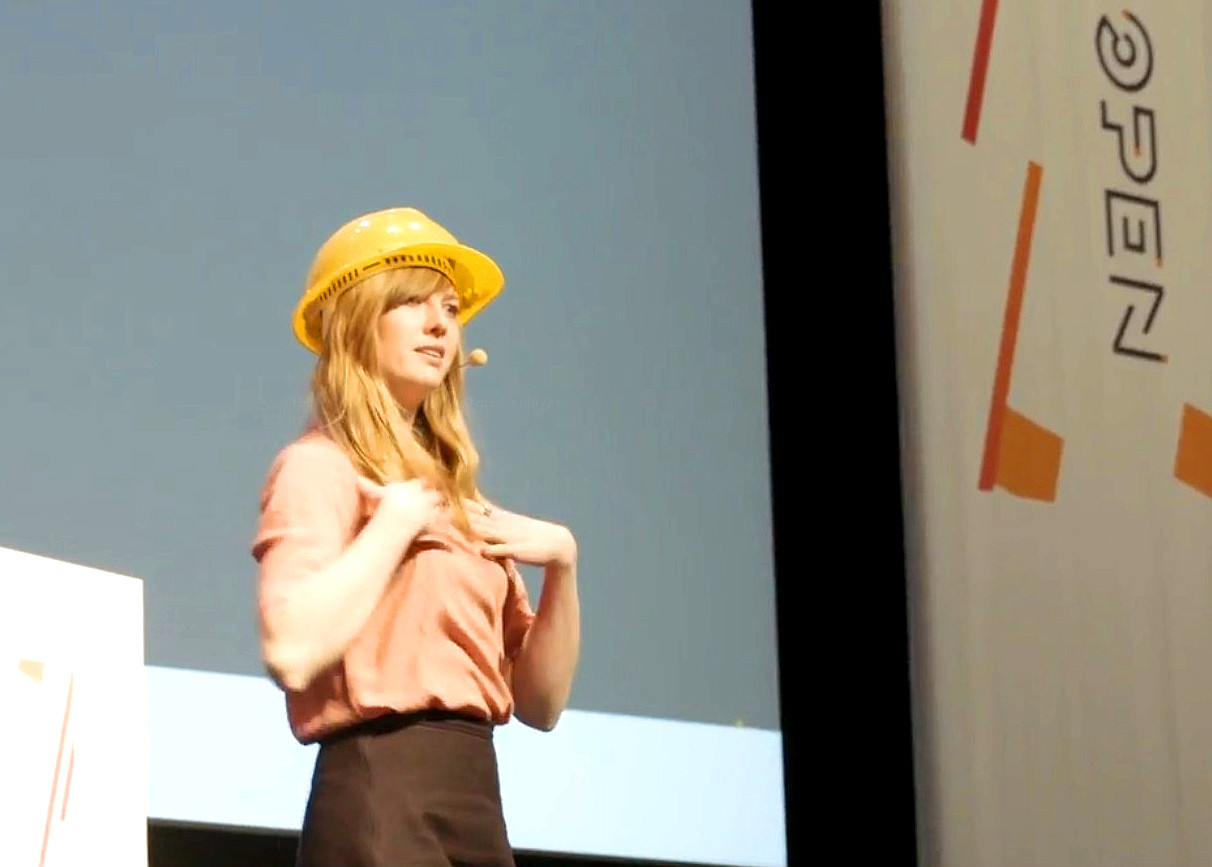 After all four contestants had presented, we went to the reception, so the audience could vote for their favourite and the jury could deliberate.

I was honestly completely dazed, and retreated into a little corner, trying to stay away from the crowds. Therefore I did not notice that there was a big screen on which they showed the votes that were cast by the audience. Then, the jury came out and also ranked me above the others: 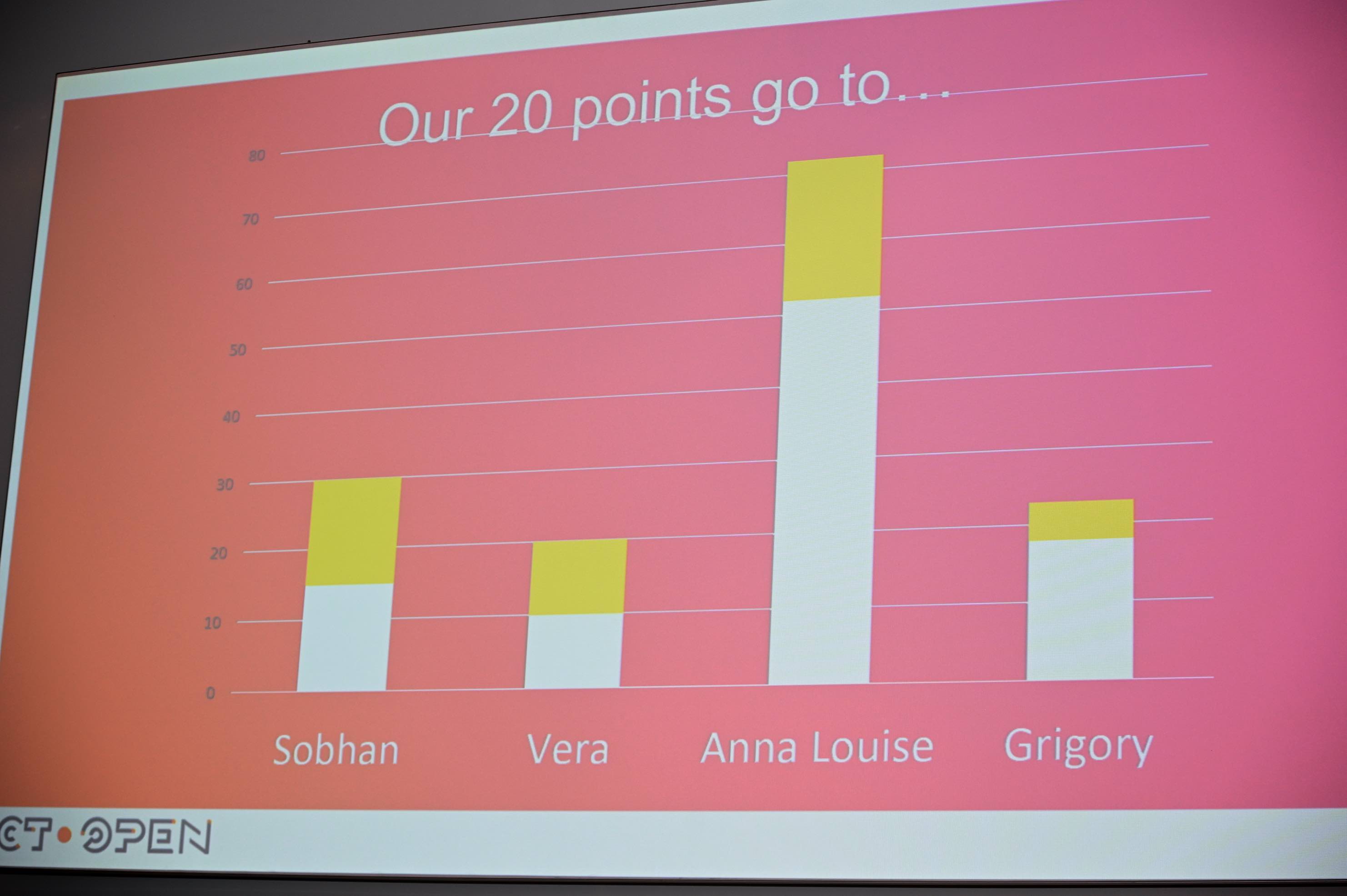 I had not seen this coming. Since I was backstage being a nervous wreck during the competition, I had no idea how the others did. All I knew was that I had just gone mute during my pitch, which seemed enough for me to get me somewhere in the bottom.

It’s safe to say that I couldn’t quite believe it when they handed me the big fake cheque. 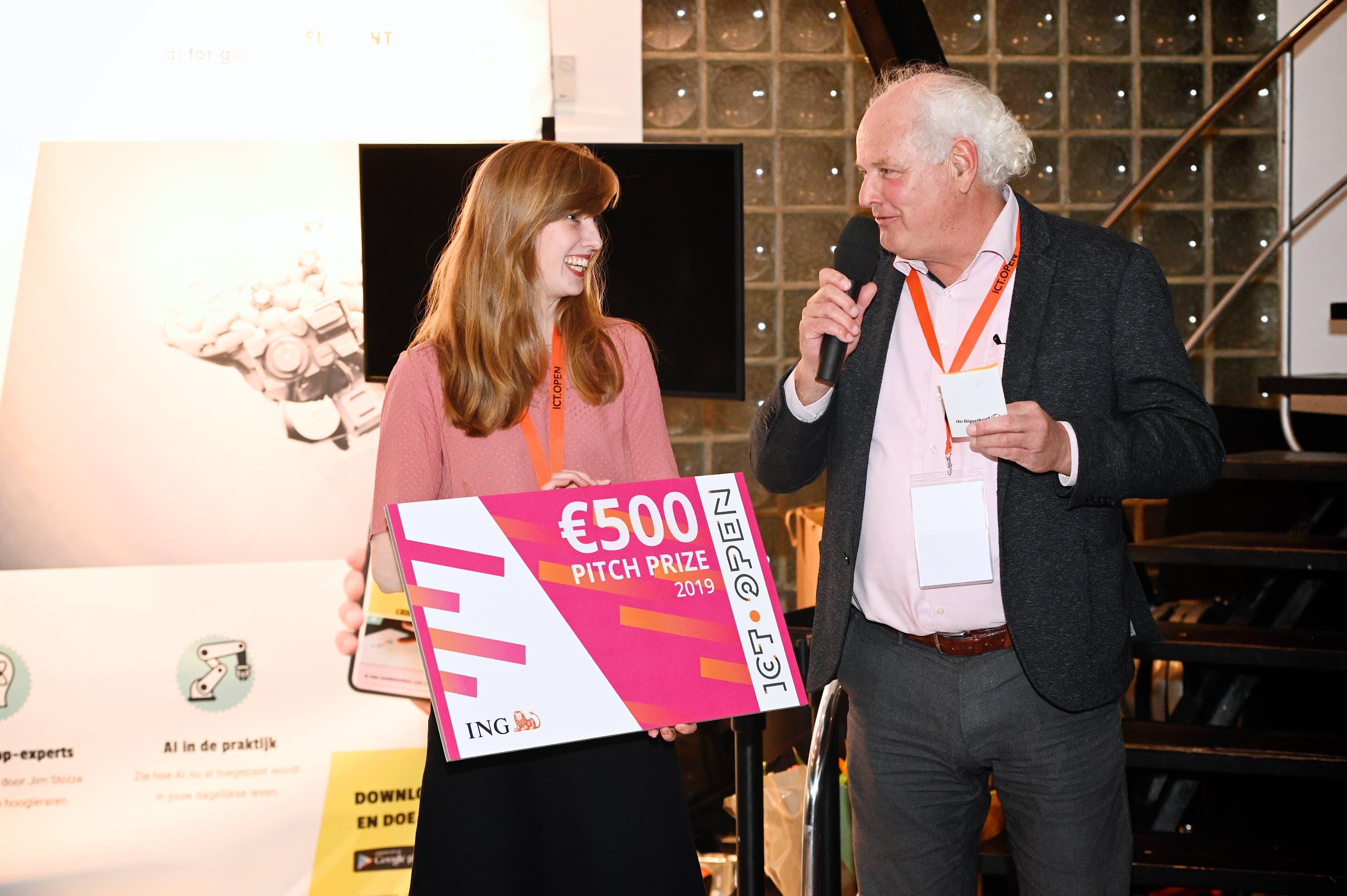 A bit of coverage

I was not the only one who scored some points during ICT.OPEN, so Leiden University decided to cover her employees’ achievements at the conference in this piece (Dutch version).

Of course, since the ADA Research Group was quite present in this year’s edition, we wrote a blog post about it as well.

I think the drawings they made for our pitches are so cute! Very funny to see all the emphasis on application in my drawing, since it is so far from how I myself visualise my research.

I guess the moral to this story is simple: when you give something your attention, it is surprising how much you can improve it.

And also: having supportive coworkers who give you their attention is incredibly valuable!

You May Also Enjoy

Workshop on Counting and Sampling, 2021 edition

I am very proud of my student Jeroen Rook, who defended his Master thesis today! The title of his presentation was: Caching in Model Counters: A Journey through Space and Time. With a very general audience, Jeroen had his work cut out for him to explain not only his work, but also the basics of propositional model counting.

Actually, that is not true. I am an outstanding reviewer! Or so say the Association for the Advancement of Artificial Intelligence and the AAAI-21 Program Committee.

I feel like I just levelled-up as a scientist! Yesterday, the wonderful Daniël Fokkinga graduated with a very nice grade!